Logos surround us throughout every day; they’re on the internet, packaging, business cards, and more. From the legendary Apple logo to the FedEx logo, we’ve seen some of the most successful logos over time. We’ll take a look at some of the most famous and iconic logos in our world in this blog post.

The Apple logo is one of the most iconic logos to date. Nearly everyone is familiar with the world-famous apple that’s seen on every Apple electronic. However, few people know that the original Apple logo didn’t look anything like the one we’re all familiar with now. The original logo, first created in 1976, showed a tree with an apple falling from it and Issac Newton sitting beneath it.

Although the original logo was unique, the logo quickly got simplified to a literal apple with a bite taken from it. Over the years, the logo has changed colors often. It went from a rainbow-colored apple to a shiny blue logo and from there changed to flat colors. Although many say that Apple’s logo is too simplistic with the mere Apple representing its company, sometimes simple is the best way to go.

You’ve seen the FedEx logo before, but do you know about the secret meaning behind it? If you look closely at the FedEx logo, directly between the E and X, you’ll see an arrow hidden between the two letters. FedEx included this symbol as a way to express their speed and precision.

However, this wasn’t always FedEx’s logo. Their first logo was created back in 1973 and was merely a blue watermark on a patterned blue background. But the logo changed to what we now know it, with the hidden symbol, around 1994 and hasn’t changed since then.

Shell originally came around as a trading company back in 1891, and its first logo was introduced in 1900. The first logo was a black and white seashell, and over time, although the original idea of a shell stayed, the logo colors changed. Throughout the years, the logo has used its name included with the logo, but the latest version is merely a stand-alone shell without any text included.

Back in 1886, most logos were in black and white, and Coca-Cola was no exception. Although the logo has changed little over time, the original logo wasn’t the in the famous red and white that we’ve come to recognize so easily. Coca-Cola is one of the rare logos that have had few major changes made to it over time.

The added color in 1958 and minor changes to the script lettering were the only major changes to the logo. The Coca-Cola logo has stood out among brands as one of the most original and unique logos that our world has ever seen. The classic red and white logo is recognized by thousands worldwide and has been grown to be loved.

The Nike logo is, by far, one of the most easily recognized and well-known logos worldwide. The Nike “Swoosh” has made its mark on people around the world, and it’s hard to find someone who doesn’t know the iconic logo.

But do you know the story behind it? The legendary logo only cost the company a small sum of $35. Graphic design student Carolyn Davidson was the one to create the iconic logo for the company in 1971, and it’s been the company’s signature logo since. It’s so easily recognized that although initially shown with the text accompanying it, the “Swoosh” is now the stand-alone symbol for Nike.

Target’s logo came around in 1962, and the history behind it, although less well known than some of the other logos mentioned here, is still a famous one. The original logo had the name displayed in front of three red and white rings. Later, the image was removed from the logo, and it became a text-only watermark. However, after that, in 2006, the bullseye returned with the text removed from it. 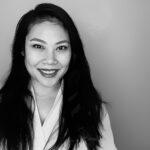 Dee Azlan is a determined, and passionate self-made artist and serial entrepreneur. She is The DNA Method creator who reached her height of glory by overcoming all her challenges by believing in herself, staying true to herself and by achieving goals that she created for herself.

After carefully and earnestly analyzing the lifelong journey that led her to a path of success, she came up with The DNA Method program, which is specifically designed to inspire future entrepreneurs to start a high impact business that is fulfilling while building a powerful brand that is authentic to them.